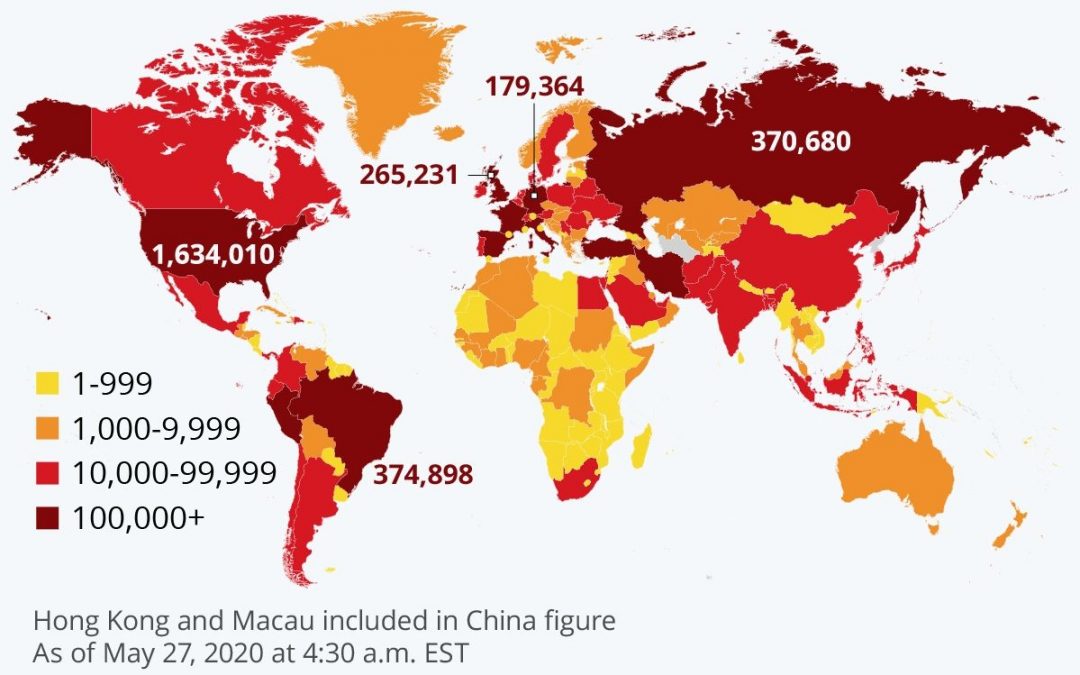 COVID-19 or SARS COV-2 has spread rapidly throughout the whole world since its initial discovery in late 2019, as seen in the figure above. In less than half a year, the resulting pandemic has caused significant loss of life and immense economic damage, prompting nations worldwide to impose preventative measures to varying levels of effect.

Although every region of the world has been affected directly by the spread of the virus, the Americas are currently experiencing the largest number of confirmed cases, as seen in Figure 3 below. Southeast Asia has the third lowest number of confirmed cases by region; however, the number of new daily cases in southeast Asia has been increasing since early April, as seen in Figure 4. This does not necessarily imply that the pandemic is getting worse, however; further analysis, such as creating a logarithmic trajectory plot of new cases versus total cases would be required to see if the rate of infection is actually slowing down.

From comparing confirmed deaths to confirmed cases, the fatality rate of COVID-19 may be inferred to be relatively low. This inference seems to be justified when comparing the fatality rate of COVID-19 to other pandemics in recent human history; in fact, COVID-19 has a significantly smaller fatality rate compared to SARS, which is a similar type of coronavirus. This does not mean, however, that COVID-19 should be underestimated; its highly contagious nature compared to most other viruses can still mean a high number of deaths. Furthermore, severe symptoms can manifest after infection, the long-term health effects of infection such as reduced lung capacity can severely reduce quality of life, and many factors such as better healthcare globally (compared to earlier decades) and increased access to healthcare in general have contributed to the lower fatality rate.

For a population of 53.39 million people (Myanmar Statistical Yearbook), a quick snapshot of the healthcare infrastructure is shown below:

Approximate number of doctors in Myanmar in 2018

Percentage of GDP spent on healthcare in 2016

Approximate number of nurses in Myanmar in 2018

As can be seen, infrastructure wise Myanmar is not particularly resilient; should a large epidemic within the country occur, it is likely that hospitals and healthcare professionals would be quickly overwhelmed. However, as of 8:00 P.M. June 2 2020 Myanmar has had a grand total of only 232 cases and 6 deaths (source: MOHS), with many of the cases being Myanmar nationals that returned from abroad. This is primarily due to the thorough and effective rapid response policy implemented by the current administration, which includes measures such as quarantining and testing all returning individuals from abroad, enforcing social distancing and mask-wearing emergency legislation, and consistently widespread public service announcements on proper sanitation methods. Large public donations by citizens and stakeholders across the nation to prevention efforts and economic damage mitigation also contributed to Myanmar’s success in containment.

Viruses such as COVID-19 can be transmitted via droplets in the air from coughing and sneezing, and such emissions are known as bio-aerosols. Changes to building operations (and possibly systems), particularly healthcare facilities, can be implemented to reduce or eliminate the potential for spreading bio-aerosols via air distribution systems. The primary literature on the subject is mainly in ASHRAE publications such as (but not limited to) the HVAC Design Manual for Hospitals and Clinics and Standard 170: Ventilation of Health Care Facilities. ASHRAE has also provided a resource page and a position paper (shown below) for guidance.